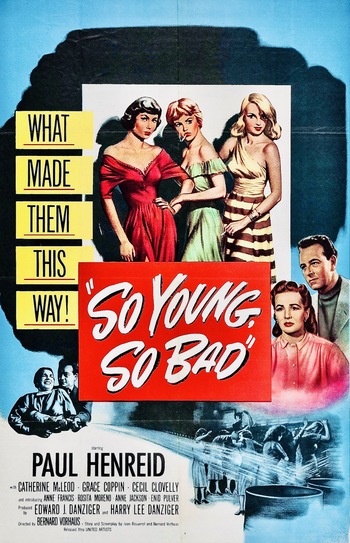 So Young, So Bad is a 1950 drama film, directed by Bernard Vorhaus, about a barbaric reform school for girls. The film is actually not a straight example of Girls Behind Bars, and could almost be seen as a deconstruction of the genre before it even became popular. It also has some striking similarities with the film Caged, which was released one day before it.

The main character is Dr. John Jason (Paul Henreid), a Polish-American psychiatrist who has taken a job at the Elmview Corrective School for Girls. He arrives there at the same time as four new attendees. They are:

Dr. Jason arrives at the school, hoping to help these girls and many others. A social worker, Ruth Levering (Catherine McLeod), is also sympathetic to the girls, but they face difficulties from Mr. Riggs (Cecil Clovelly), who runs the school and sees the girls as little more than criminals and animals, and Mrs. Beuhler (Grace Coppin), the sadistic matron who carries out punishment.