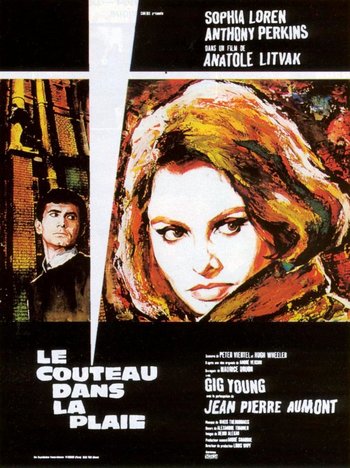 Lisa (Loren), an Italian woman, has a fight with her American husband Robert Macklin (Perkins) and decides to leave him due to his abusive behavior. He leaves for a business trip, and Lisa later learns that his plane crashed and there were no survivors reported. Lisa believes this to be the end of her ordeal, only to find Robert having crawled back to their flat, injured but alive, having survived by a stroke of luck. He reveals to her that he has a life insurance and wants her to collect it, and although she knows that it's a bad idea, Robert agreeing to leave her once she hands it to him leads her to accept. Lisa must contend with the complications of the scheme, which involve David (Young), a man interested in Lisa; Robert's jealousy, and her own guilt. Eventually the stress of putting up with Robert is too much for Lisa, and she must make a decision on the way to the Belgian border.