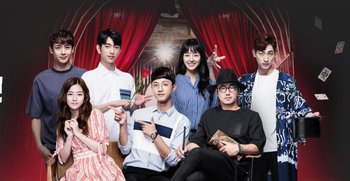 Lee Nara, a university student studying to become a public servant. J, a popular magician who's been searching for his lost brother. Jun, a person who chooses to live like the poor despite a resident doctor at a hospital. Seong, a physicist who displays the scientific attitude and believes that everything is explained by science. The four of them gather at Magic School, headed by Master Han, with different reasons for learning magic.