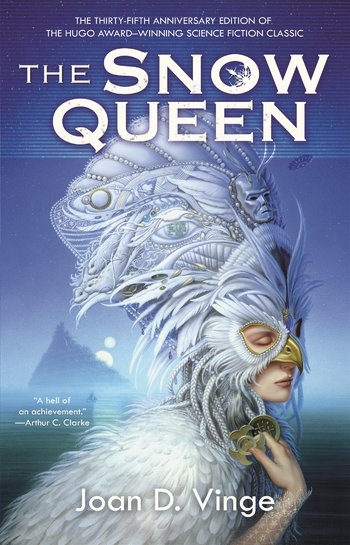 The Snow Queen series, by Joan D Vinge, is a series of four books set in the far future world of the Hegemony. The first and titular book, The Snow Queen, is a multifaceted, old-fashioned Space Opera cast in the form of a high-tech fairy tale, with nods to Dune and Welsh Mythology. It won the 1981 Hugo Award for its author.
Advertisement:

Tiamat is a mostly oceanic world which orbits a black hole, and seasons there last for hundreds of years. In the warm years, the Summer Queens rule and the planet reverts to primitivism; in the cold years, a single Snow Queen is kept perpetually at age 18 by the water of life, a youth serum extracted from the blood of the native "mers". In the Winter years The Hegemony, remnants of a once mighty star-spanning empire, are able travel through the nearby black hole to exploit Tiamat’s resources; in the Summer years, the black hole becomes too unstable for space travel, and the planet loses whatever luxuries and technology it had.

The story begins when Arienrhod, a Winter Queen whose reign is soon to end, seeks to break the cycle of exploitation by cloning herself among the Summer fisherfolk, with the idea of retrieving her daughter at adolescence and having her reign as the next Summer Queen. However Moon, her clone daughter, has other ideas for her life; raised among simple villagers, she falls in love with her cousin Sparks, becomes a sacred advisor/prophetess known as a Sibyl, and is kidnapped and taken off-world where she learns the true nature of the sibyl network and the decay of the former Empire. Sparks, meanwhile, travels to the capitol city of Carbuncle to find his fortune and becomes the Snow Queen’s lover and chief huntsman responsible for the slaughter of the sacred mers. Woven through all this are the offworlders from the Hegemony, many of whom have their own agendas.

Basically there is something for everyone in this book: feminism, adventure, romance, empire building, love triangles, exotic cultures. A sequel, The Summer Queen, was later written, as well as two ancillary novels, World’s End and Tangled up in Blue, which fill in the plot and answer questions about what happened between the two longer books. The books in order of internal chronology are: