Literature / Soldier of the Mist 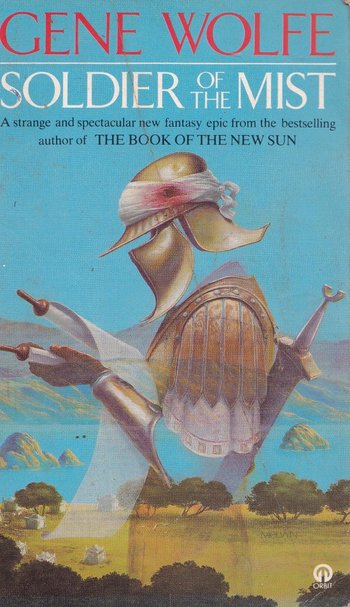 Soldier of the Mist is a Historical Fantasy novel by Gene Wolfe. A prologue claims the story is the translated version of an ancient scroll written (mostly) by a man called Latro, a Roman mercenary trapped in Ancient Greece after the defeat of Xerxes's Persian army at the Battle of Platea. In the battle, Latro suffered a nasty head wound, which now causes him to forget everything from the day before. However, he can now also see the gods and supernatural creatures which are Invisible to Normals. At the advice of his doctor, he begins writing his experiences in the scroll, as he tries, with the help of his friends, enemies, and the gods, to return to his homeland.

Soldier of the Mist was followed by two sequels: Soldier of Arete, which chronicles more adventures in Greece and Thrace; and Soldier of Sidon, where he goes on a journey to Ancient Egypt and the lands down the Nile.