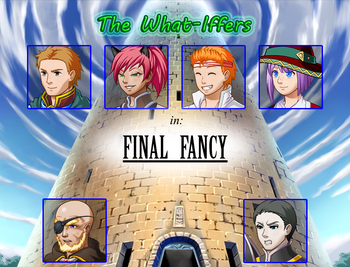 The What-Iffers in: Final Fancy

is a freeware game created by Bernard John Badger, AKA Aubrey the Bard. It is an Affectionate Parody of the Final Fantasy series with action-puzzle gameplay, something of a cross between Adventures of Lolo and The Lost Vikings.

The story of The What-Iffers in: Final Fancy follows a group of roleplayers in a virtual environment called L.U.S.I.D. While discussing what sort of campaign they want to run next, they hit upon the idea of using the setting of a popular JRPG series called Final Fancy. Rather than following the usual gameplay of a JRPG, however, they opt for puzzles that require teamwork and the use of special abilities.

Once they are inside the shared imaginary world, the in-character story begins to unfold. Four strangers — John, Shemri, Aubrey, and Cherry — find themselves trapped in the dungeon of the Vampire Lord Adrian. Adrian haughtily explains that he used a spell to find and imprison the destined Heroes of Light. However, he is well aware that fate has a way of making sure prophecies are fulfilled sooner or later, so he has devised a way of encouraging it to be later: the dungeon is escapable by means of completing a series of challenges, which Adrian expects will take them as much as a literal lifetime.

After Adrian leaves, the ghost of a former prisoner named Noab speaks up to offer the ragtag team guidance. The remainder of the game is spent learning the four heroes' individual abilities and using them to overcome challenges:

The What-Iffers in: Final Fancy contains examples of: