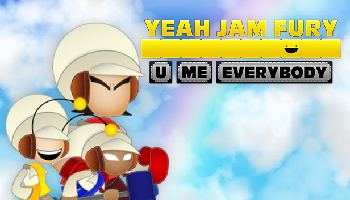 Yeah Jam Fury is a 2012 puzzle-platformer video game made by McLeodGaming and World Entertainment Studios+ (WES+, formerly known as WillyWorld). The game stars three characters mentioned in the title, Yeah, Jam, and Fury. The characters must use their skills together (for example, Yeah can place down blocks, Jam can boost on them, and Fury can smash them) to complete levels by getting a mango. A sequel, titled Yeah Jam Fury: U, Me, Everybody! was released on the 15th of December 2017.

Jammin' tropes from the game: