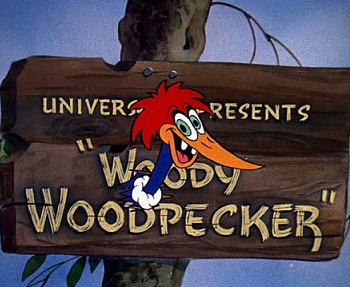 "Guess who?"
Everybody thinks I'm cra-ze-ee-ee!
Yesiree, thats me, thats me!
Thats what I'm cracked up to be!
I chop a hole in every tree,
Knock on wood! (taps on branch)
Well, knock on woooood!
So I'm crazy, so what-what can i do?
So are YOU!
—Woody Woodpecker, singing the opening song.
Advertisement:

The Cracked Nut note  Originally called Woody Woodpecker, but we will refer to it here by it's Castle Films reissue title to avoid confusion is a 1941 short cartoon released on June 7th, and the first solo short of Walter Lantz's most famous character, Woody Woodpecker, even though it is not his first appearance (that belongs to the Andy Panda short "Knock Knock").

The short begins with a tune conducted to the rhythm of Woody's laugh, all while panning across the opening titles, not to mention a tree pecked full of large holes, courtesy of our hero. Woody literally bursts onto the screen, delivering his iconic "Guess Who?", followed up with his famous laugh. After singing the opening song (quoted above), an annoyed owl causes him to ram into the tree and fall into a hallicinogenic daze, with the local Woodland Creatures commenting on Woody's insanity. A challenge or two later from them, and Woody ends up ramming himself into a petrified tree, dazing himself to where he decides he really is crazy, and goes off to see the local psychiatrist, Dr. Horace N. Buggy. It doesn't take long for the audience to realize that Mr. Buggy is just as crazy as Woody, if not more. Regardless, Woody plays along with the doctors shenanigans, until the short ends with Woody flying out of the doctor's office—and into the theater where the cartoon is playing! The Doctor promptly goes looney, while Woody annoys the audience member he's sitting next to enough to where he slams the seat into Woody, prompting his screams of help as the cartoon closes.