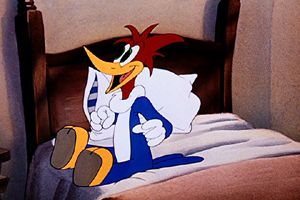 Woody, in "Smoked Hams" (1947)
Everybody thinks I'm cra-ze-ee-ee!
Yesiree, that's me, that's me!
That's what I'm cracked up to be!
I chop a hole in every tree,
Knock on wood! (taps on branch)
Well, knock on wo-o-o-o-od!
So I'm crazy, so what-what can I do?
So are YOU!
-Woody Woodpecker, in his early Cloudcuckoolander persona.
"Is this trip really necessary? Sure it's necessary! I'm a necessary evil!"
—Woody, from the opening of Ration Bored, in his more Jerkass persona.
Advertisement:

A prominent example of the Prankster character, Woody Woodpecker was the star character of the Walter Lantz cartoon studio and is the mascot of Universal Studios note this position was briefly taken from him by Fievel of An American Tail in the 80s and early 90s- he seemed to have earned it back, only for the Minions to steal it from him in the early 2010s. In the earliest cartoons, he was essentially Lantz's answer to Daffy Duck and Bugs Bunny, being a strange hybrid of the two characters, with the energy, looniness and demented nature of Classic Daffy merged with hints of the wiseacre attitude of Bugs—also enforced by the fact that they even got Bugs' and Daffy's voice actor for the first three cartoons!

After the first batch of cartoons however, the wiseacre bit of Woody was casually dropped in favor of the more Jerkass aspects of his character. But things changed when original director Alex Lovy stepped down and ex-Disney animator Shamus Culhane took over direction of the shorts for a few years, ramping up the direction of the previous cartoons considerably, as well as giving Woody his iconic redesign. His take on Woody was much more fleshed out than the previous incarnation — whereas the original character was just a mindless heckler that went about causing havoc on sheer principle, Shamus supplied Woody with more clearly defined traits so that we could understand why he was going about causing trouble — specifically, by establishing that he is a selfish, ignorant being who only stands for himself and will not stop at nothing to achieve his goals, regardless of whoever gets in his way. He also helped firmly establish Woody's trait of being a Big Eater (which did pop up in early cartoons, but wasn't a central part of the character) which served as the basis for many of his cartoons. However, Culhane's direction, for all of his improvements, made Woody a bit too unlikable, taking him from being a screwy bird to sometimes being flat out malicious in some episodes (i.e. The Barber of Seville).

But this changed yet again when Disney veteran Dick Lundy took the directors chair and toned down Woody considerably, establishing that he cannot go crazy unless given a genuine reason to. During his direction, Lundy essentially turned Woody into an ersatz Donald Duck, mixed in with Woody's typical pranking tendencies. By the 50s, at the behest of Universal, Lantz softened Woody into a much more heroic character, with occasional bouts of his old antics time and time again. 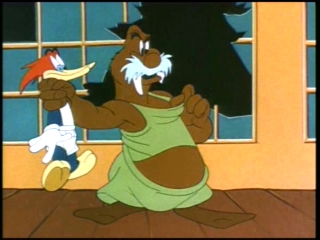 Woody's original set in stone rival of Swedish descent, Wally was made to serve as Woody's short-tempered comic foil, as Elmer Fudd was to Bugs Bunny or as Squidward is to Spongebob Squarepants. 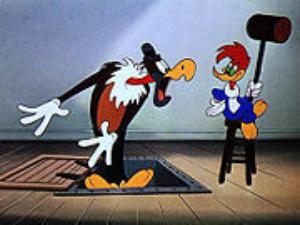 Woody's other comic foil, Buzz Buzzard is a sleazy, greedy conman who will stoop to any depths to get what he wants. 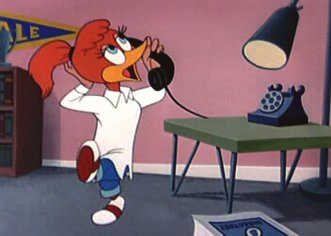 Woody's girlfriend. While she only appeared in one of the original theatrical cartoons (and in a very one-dimensional role at thatnote Whether the female woodpecker appearing in International Woodpecker is her or not is up to debate) she became a recurring character in the comics and became much more prominent in the newer show. Similar in personality to Woody, but much more dignified.

Debut: Get Lost (1956)note theatrical debut—note that they appeared earlier in comics

An ugly, nasty, and occasionally smart-alecky old lady who often gets the better of Woody if he causes her trouble. First appeared late in the series, but became a regular very fast. Also a frequent player in The New Woody Woodpecker Show, often as Woody's short-tempered landlady. 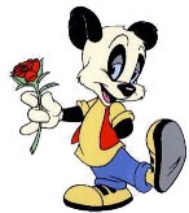 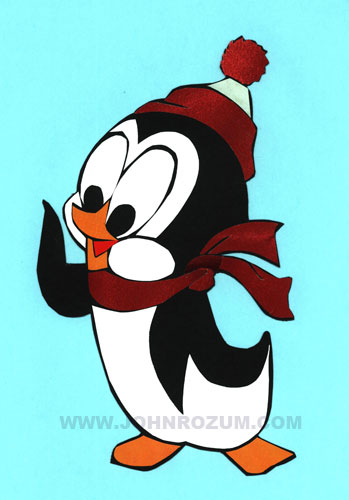 A little penguin living in Fairbanks, Alaska who, oddly enough, hates the cold and goes out of his way to find warmth. While not directly connected to Woody Woodpecker, his shorts were aired alongside his on the original Woody Woodpecker show. 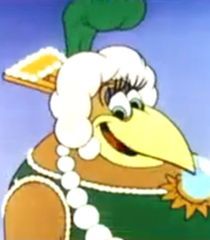 A single millionaire who falls madly in love with Woody. He doesn't feel the same way about her. At all.