The character sheet for the PBS cartoon, WordGirl. 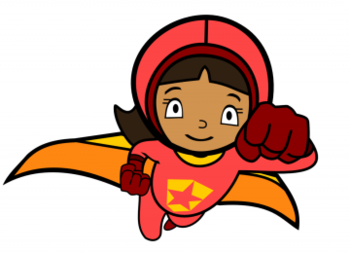 The main protagonist of the show. She is from the planet Lexicon, but crashed to Earth as a baby, where she was adopted by the Botsfords. As the 10-year-old superhero WordGirl, she defends Fair City with her superpowers and exceptional vocabulary. 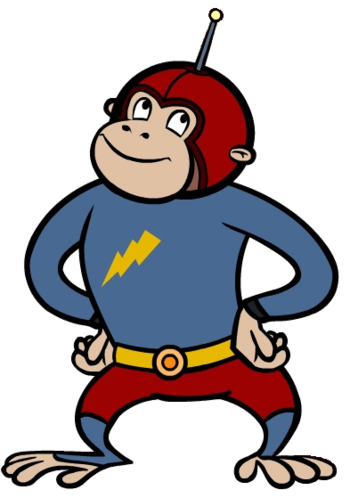 An intelligent chimpanzee from space who once famously served in the Lexicon Air Force, but after a mishap in space ended up on Earth with an infant WordGirl. He was then adopted into the Botsford family as their pet, and fights alongside WordGirl as her loyal sidekick.
The Narrator

The Narrator of the story is able to freely interact with the characters. He is biased toward the heroes, so he often assists them by giving advice, like telling WordGirl where to find the villain she's after. 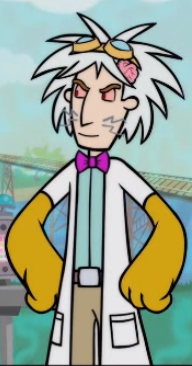 Fair City's #1 Villain
He used to be a benevolent scientist who assisted WordGirl, but a Freak Lab Accident merged his brain with that of a evil lab mouse, turning him into an unhinged scientist whose only goals in life are to eat cheese and to cause as much destruction as possible.
Doctor Two-Brains's Henchmen

Doctor Two-Brains's bumbling henchmen who always screw everything up for him. 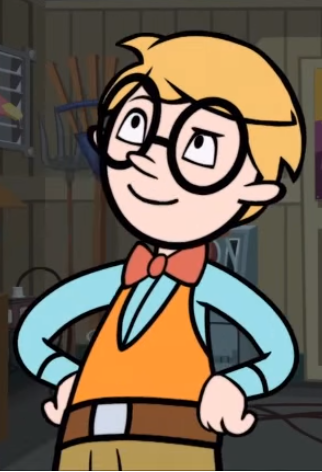 The Boy Genius
A genius 10 year-old boy who terrorizes the city with giant robots. He also has an obsessive crush on WordGirl.
Chuck the Evil Sandwich-Making Guy 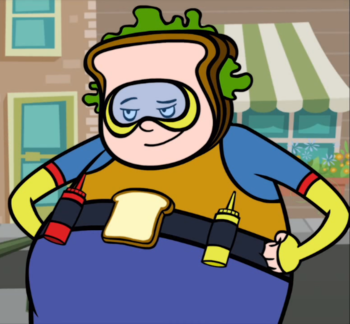 Yes, his head is a sandwich.

A big guy with a sandwich for a head and a general obsession with sandwiches. He lives in his mother's basement and plays video games, only committing crimes either because he's angry at something/someone, or in an attempt to be cool.
Granny May

A villain who poses as a sweet, deaf old lady but who in actuality is a master thief who specializes in fooling others and convincing everyone to turn against WordGirl.
The Butcher

A large man who dresses like a butcher and has power over meat, which includes conjuring it up and telekinetically controlling it.
Kid Potato

The Butcher's father, who has power over potatoes.

Beatrice Bixby works in a copy shop, and is bitterly jealous of the star employee, Dave. She obsessively cleans and maintains a copy machine, doting on it like it's her child. After curiously pressing a mysterious Big Red Button on the machine, she becomes Lady Redundant Woman and wreaks havoc.
Dupey

One of Lady Redundant Woman's copies, who gained free will and started dating the Butcher, abandoning her mistress. The Butcher gave her a name, and he can easily tell her apart from the original. Sadly, she dumps him and flees the city on a bus. However, she keeps a photo of him and seems to pine for him.
Royal Dandy

An evil copy of WordGirl that Lady Redundant Woman creates from a picture of her.
The Coach

A devious man with no superpowers of his own, he instead manipulates other villains into committing crimes for him. One recurring scam of his is a villain night school, which produced Invisi-Bill and Big Left Hand Guy (as well as Ms. Question, though she didn't graduate).—-
Ms. Question

A woman obsessed with questions. She always speaks in the form of a question and she does her best to confuse people to force them to ask questions, usually by spreading chaos. Her lair is very strange, keeping with the theme.
Invisi-Bill

A man with the power to turn invisible at will. His need for attention often ends up ruining every crime he's part of.
Big Left Hand Guy

A man with a big left hand. He tends to use his large hand to hail one of the few cabs of Fair City to escape after committing a crime.
Brent the Handsome Successful Everybody-Loves-Him Sandwich Making Guy

Chuck's older brother, who is a popular and successful business man. He also has a sandwich-shaped head. Though he is a legit worker and has no malicious tendencies, he briefly agrees to be Chuck's sidekick.
Seymour Orlando Smooth

A man who pretends to be a game show host to scam contestants out of their cash and valuables.
Mr. Big / Shelly Smalls 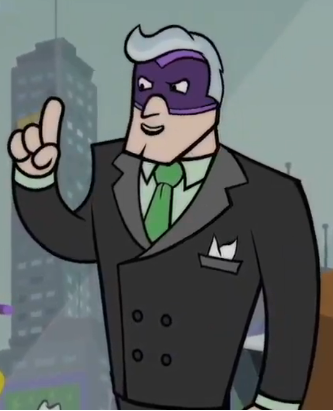 A smug, childish, and greedy businessman out to line his pockets with even more money than he already has. He usually relies on mind control devices to achieve his goals, though on occasion has tried other means to little success.
Leslie

Mr. Big's personal assistant, who does most of the heavy lifting in his schemes.
Victoria Best

A child prodigy whose parents expect her to be the best at everything she does.
The Whammer

A muscle-bound man with the power to make powerful sonic booms by bringing his fists together. He inserts the word "wham" or variations thereof at least once into each sentence. Example: "Wow, that was so whammer!"
Nocan the Contrarian

A barbarian warrior who speaks and acts in opposites, kind of like Bizarro from Superman.
Birthday Girl / Eileen

A greedy little girl who thinks every day is her birthday. She demands that anyone she meets give her whatever she wants. If she is refused, she will throw a tantrum and grow into a hulking green behemoth.
Captain Tangent

An annoying waiter who is prone to telling boring stories and then going off on even more boring tangents. He becomes a pirate-themed criminal after discovering his power.
Amazing Rope Guy

A villain who's less of a villain and more of a fumbling, comic relief character.
Miss Power

A new villain introduced in the four-part special "The Rise of Miss Power". She comes to Earth pretending to be a superhero and takes WordGirl under her wing, while secretly preparing to take over and not really caring about the city's wellbeing.
The Learnerer

A man who can learn anything and devise counter-measures after observing it once. He has a habit of using suffixes twice. For example: "Learnerer" and "adaptinging".
Energy Monster / Maria

A creature made of electricity that is driven to absorb electricity and rampage through the city. Eventually, a device made by Dr. Two-Brains allows her to talk, and it is revealed that her name is Maria.
WordBot

A robot created by Tobey in WordGirl's image and programed to be devoted to him. She has all of WordGirl's abilities, but is slightly more powerful.
Rhyme and Reason

A criminal duo who steal things for whatever rhyme with the reasonable thing.

Becky's adoptive father. He's a stay-at-home dad with bizarre mannerisms, and is completely oblivious to his various blunders, as well as to his daughter's secret identity.
Sally Botsford

Becky's best friend. She's a talented artist and poet and has a tenuous grasp on reality.
Todd "Scoops" Ming

A boy who runs the school newspaper, and the object of Becky's affections.
Chuck's Mother

Chuck and Brent's mysterious, naggy, and New York-accented mother who is only ever seen from behind or with her face obscured. Loves both of her children, but tends to favor Brent.
Exposition Guy

A man with no real purpose besides moving the plot along by running up screaming for help, alerting WordGirl to a crime or disaster. He constantly mistakes random places for the police station. According to "Scary with a Side of Butter", he sets his watch ahead so he can be the first to panic.
Warden Chalmers

The warden of the local prison who wears a large cowboy hat that he often threatens to eat.