Video Game / Tower Of The Sorcerer 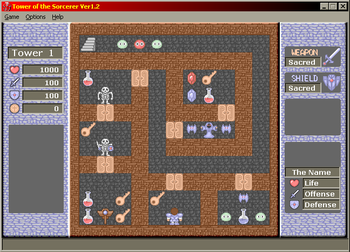 Ready for some meticulous planning?
Advertisement:

Tower of the Sorcerer is a DOS Puzzle Game disguised as an RPG, made by Watanabe Nao in 1996. The game was originally known for having graphics and frame rate(60 FPS) that's ahead of its time. The game received a port for Windows 95 in 1998.

The story follows a Save the Princess format where the hero, armed with the magic sword and shield, scales through a tower to defeat the Big Bad and save the princess. However, the Hero got ambushed in the earlier floors and had his gear stripped away. Sent to a jail cell, the Hero met a thief who helped him escape the cell. Now armed with inferior equipment, the Hero must calculate the best move to advance or he will face an unmovable obstacle.

The game's official site, from which it can be downloaded, is here