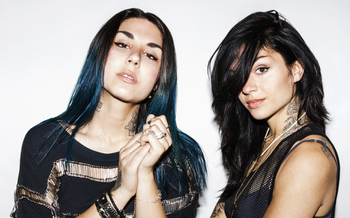 "I'mma do what I want, whatever,
I'mma rage 'til the dawn, all-nighter,
Don't hold your breath, you know I'll sleep when I am dead!
I live for the night, I live for the lights,
I live for the high 'til I'm free falling..."
— Live For The Night

Krewella is an Electronic Music trio turned duo from Chicago. The members consist of sisters Yasmine and Jahan Yousaf as vocalists and songwriters. Before 2014, Kris Trindl, a.k.a. "Rain Man", produced for Krewella, but he had resigned & sued the sisters after fears that they and their management were phasing him out of the group.