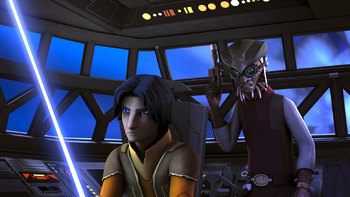 "No, I'm not running away from my problems. I am simply helping someone with their problems! There's a difference."
— Ezra Bridger
Advertisement:

Frustrated with his training and still stressed out over his encounter with the Inquisitors, Ezra answers a distress call from Vizago, only to find his ship has been taken over by Hondo Ohnaka.