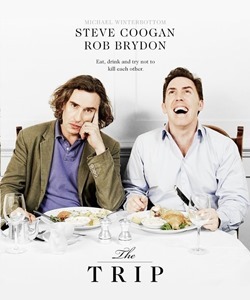 "Tomorrow we ride! We leave at ten-ish."

A follow-on from A Cock and Bull Story by the same creative team, it involves and uses a lot of the same Post Modern meta elements; the plot involves Coogan getting a job writing restaurant reviews for the Observer in an attempt to impress his epicure girlfriend Mischa (Margot Stilley), only for the plan to hit a snag when he and Mischa have an argument and split up. In desperation, he ends up convincing his old comedian colleague Brydon to come along instead, thus prompting a week of fine dining, beautiful scenery and the two men getting on each other's nerves.

A third installment, The Trip to Spain, was released in 2017, while the fourth, The Trip to Greece, began airing on Sky One in March 2020. Despite some earlier talk of The Trip to Ireland, Coogan has indicated that the fourth installment is the last.

Not to be confused with the 2002 gay romance film of the same name or the 1967 film by Roger Corman.