Video Game / The Gates of Versailles 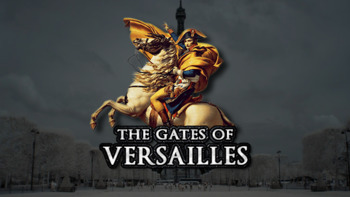 Impossible is a word to be found only in the dictionary of fools.
Advertisement:

The Gates of Versailles is a Hearts of Iron IV Game Mod that is set in an alternate timeline much like fellow mods such as Kaiserreich, Red World or The New Order, where the Napoleonic Wars ended in a stalemate, allowing The French Empire and Emperor Napoleon I to spread French Influence and the Continental System across most of Europe. This radically changed the results of the first world war, with the second not far off the horizon.

The French Empire now faces threats from all sides. Their ancient rivals in the British Isles are stirring once more, the Fascist Italian Confederation is starting to make moves on the Two Sicilies, the many vengeful German states seeking retribution, the Enbitterned Unites States of America, and even a resurgence of the Jacobins as an internal movement.