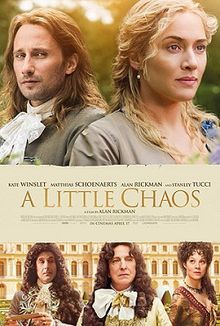 Do you believe in order over landscape?
King Louis XIV: And what protection can the gardener afford this rose from the harsh elements of change?
Sabine De Barra: Patience, care, and a little warmth from the sun are our best hope, your Majesty.
Advertisement:

A Little Chaos is a 2014 film directed by Alan Rickman.

André le Nôtre is the king's gardener, commissioned to build the gardens of Versailles. He hires a relatively unknown gardener, Sabine de Barra (Kate Winslet), to build an outdoor ballroom on the grounds. While the common-born Sabine navigates the perils of the French court, André wrestles with his devotion to his work and his growing attraction to Sabine, despite his existing marriage.

A Little Chaos is the second and last film directed by Alan Rickman, and the second film featuring him and Kate Winslet since 1995's Sense and Sensibility.

A Little Chaos contains examples of the following tropes: