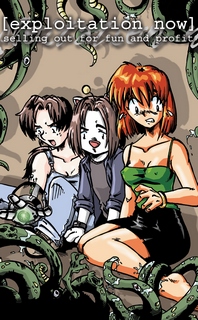 Exploitation Now was the first Webcomic from Michael Poe (Creator of Errant Story and Does Not Play Well With Others) that ran from 2000 to 2002 on Keenspot. Initially the comic followed in namesake in the form of two characters: Ralph Givememore (definitely not a Moogle) and Bimbo Moneymaker. Two roommates who pretty much messed around with each other while making as many sexual jokes as possible. Soon, another character, Jordan Kennedy, a very sarcastic self proclaimed "Evil Genius" joins them and not long after Bimbo's sister, Bush Moneymaker, is brought into the cast. However the latter two characters soon started to become the focus of the comic as more of Jordan's backstory was known. And the series quickly took a dark turn.

Still floating around the net since its end, you can read it here

Tropes seen in Exploitation Now include: