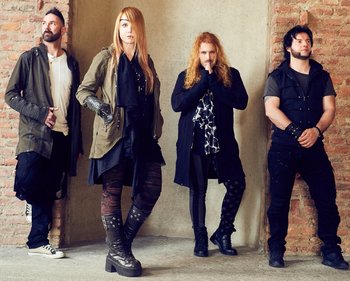 In the middle of
the world I stand, unbreakable.
Take a leap of faith,
create your own fate, unshakable.

A Greco-Italian electronic/industrial/symphonic rock/metal band conceived in Japan and currently based in the UK, Season of Ghosts describes itself as "a spiritually groundbreaking intergalactic music project, dedicated to the love for the unseen and film soundtracks". The band was founded by singer Sophia Aslanides in 2013 and takes the hybrid metal trance fusion of her former band Blood Stain Child's εpsilon to a whole new level by adding orchestral and industrial elements.

The band dropped their debut The Human Paradox in December 2014, to massive fanfare and some critical acclaim, and a Remix Album Remixing the Paradox within a year of release. They decided to take a break for the next couple years, their only release during the period being "Surreal", a collaboration with Russian industrial metal act Fatal FE (formerly Fail Emotions), who had previously contributed a track to Remixing the Paradox. In 2018, the band worked on and in October of that year released their sophomore A Leap Of Faith, showcasing a more consistent sound and more prominent vocals from Sophia.