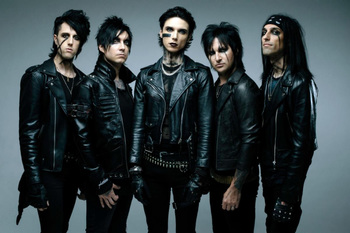 Line up as of 2019. From left to right: Lonny Eagleton (bass), Jake Pitts (lead guitar), Andy Biersack (vocals), Jeremy “Jinxx” Ferguson (rhythm guitar), Christian “CC” Coma (drums)
An American Screamo/Metal Core/glam metal band based in Hollywood, California. Famous for their KISS-like face paint, and having both a strong fan base and strong hatedom, the latter mainly from certain uncharitable metalheads. They started out as a metalcore-styled band with a penchant for face paint and glam styled theatrics before making these themes overt by switching to a pure hair metal sound, becoming possibly the modern purveyor of the 80's sound.
Advertisement: