Fanfic / A Dream of Dawn 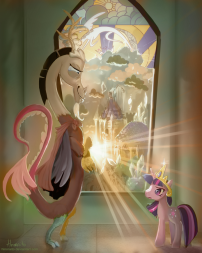 When facing Twilight Sparkle, Nightmare Moon was given a choice: redemption or revenge. What if she had chosen the latter? A grim fate awaits Equestria, but in a time of greater strife and conflict, Discord's return is accelerated. While he expected to bring chaos, he did not anticipate that he would end the Longest Night and bring hope and joy back to the land.

Discord struggles with the temptations of his base nature versus his unexpected role as Equestria's savior. Both Twilight Sparkle and Nightmare Moon are seeking Celestia, though for very different reasons. Meanwhile the remaining Element Bearers each have to deal with a world thrown into disarray.

A Dream of Dawn

is a My Little Pony: Friendship Is Magic fanfic by Starsong

A Dream of Dawn includes examples of: