Recap / Avatar: The Last Airbender "The Warriors of Kyoshi" 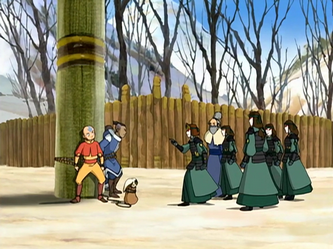 The Warriors of Kyoshi interrogate the Gaang.
"I am a warrior. But I'm a girl, too."
—Suki

On their quest to the Northern Water Tribe, Aang decides it's of vital importance that he ride Giant Koi Fish, a distraction which results in the gang being captured. Much to Sokka's surprise, however, the group who captured them is a troop of warrior women. His sexism doesn't exactly make them sympathetic to letting the group go free, but it turns out that these are the Warriors of Kyoshi, named after the previous Earth Avatar, and thus they are eager to help the Avatar. Aang's fame goes to his head as he attempts to impress Katara, while Sokka learns a lesson or two about gender equality from the Kyoshi Warriors—in particular, their pretty leader Suki. However, news that the Avatar is at Kyoshi Island spreads, enticing Zuko to pay a visit...