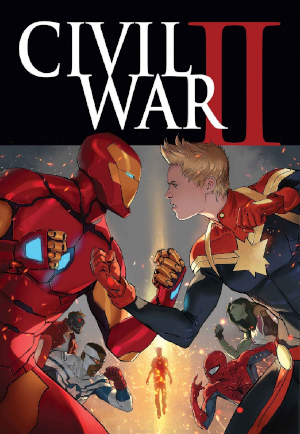 Civil War II is a 2016 crisis crossover event published by Marvel Comics, and a sequel to the Civil War arc that happened a decade earlier. Brian Michael Bendis and David Marquez (the creative team behind 2015's Invincible Iron Man) tackle the story's dedicated title, which debuted around the time Captain America: Civil War — a pragmatic adaptation of the original event — hit theaters.

When a Terrigen Mist cloud covers a gathering of students, one young man, Ulysses, is revealed to be an Inhuman. His ability, to see into the future, is seen to be a boon to some and a worry to others, with this rift being most evident between Tony Stark, who worries that they could overstep certain boundaries, and Carol Danvers, who feels that they can use him to stop disasters before they start. However, when a vision of the Mad Titan Thanos leads to casualties, battle lines are drawn — both Tony and Carol refuse to allow others to be harmed, but while Carol sees Ulysses as a boon and being able to prevent more lives lost, Tony feels he is a threat and must be taken away from others before someone else dies trying to stop the future.

In August 2016 the series was given

another issue and a complete overhaul in the second half to wrap things up, as Bendis was dissatisfied with the originally planned ending.

Similar to the original, a faction of heroes including Ms Marvel and Nova turned or remained neutral in the event, either due to disagreements with fighting fellow heroes, or after seeing the worst of the side they initially backed.

Like other crossover events, this story will encompass the entire Marvel Universe in one way or another: