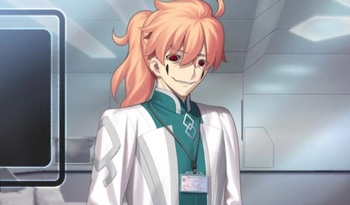 Well, looks like Dr. Roman is about to give some good—oh god!
Advertisement:

Surprisingly for a Mobile Phone Game (but not for a Fate work....) Fate/Grand Order has some incredibly dark parts.

Chapter 2 - Cosmos in the Lostbelt