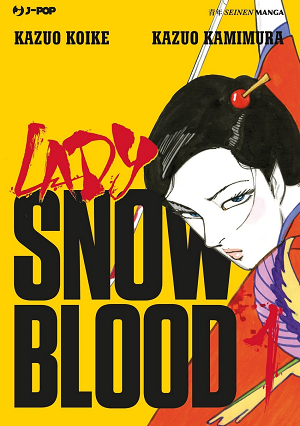 "I am a vehicle of retribution who roams in search of my mother's sworn enemies."
— Lady Snowblood
Advertisement:

The Lady Snowblood manga series was created by Kazuo Koike while the artwork was drawn by Kazuo Kamimura. First published and serialized in 1973 in the Weekly Playboy magazine in Japan. The manga series didn't get translated into English until 2005 by Dark Horse Comics.

The story begins with the birth of the protagonist, Oyuki. She was born on a snowy day inside a woman's prison. Before her mother passed away due to complications with childbirth, she entrusted a prison cellmate to look after Oyuki while reminding her that she has a task to fulfill — her last wish: to seek vengeance against her enemies, who slaughtered her family and raped her brutally in the past.

After years of torturous training under a strict priest, Oyuki grew up to be a fine looking woman in her prime, chasing the remaining enemies of her mother. Oyuki uses her sex appeal, charms and a sword hidden under an umbrella as her tools of death to get the job done as an assassin.

The manga itself was popular enough to be adapted later into a 1973 live-action film of the same name directed by Toshiya Fujita, starring Meiko Kaji as Oyuki. The film created a cult following, resulting in a sequel, Lady Snowblood 2: Love Song of Vengeance. Quentin Tarantino was inspired by the film, which resulted in the creation of Kill Bill.

A Science Fiction reimagining called The Princess Blade was released in 2001.