Literature / Revenge of the Body Squeezers 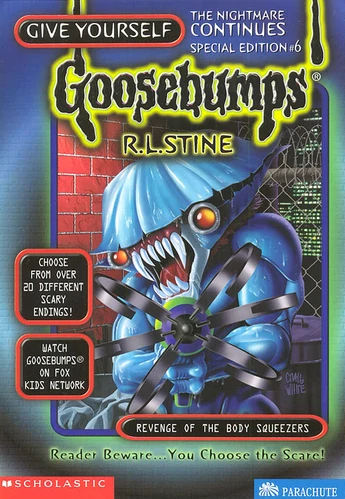 The Give Yourself Goosebumps Special Edition book where the Body Squeezers return.

You return from a trip, only to be informed by your friend Jack Archer that there was an alien invasion while you were gone. Specifically by a race called the Body Squeezers who steal human bodies. They were defeated but a new type that is blue has popped up. You don't buy it at first but soon one turns up and kidnaps Jack and his sister. You follow it and learn the aliens have planted a bomb that will explode the next day and turn everyone into black orbs. You have to decide what to do, stay to help your friends or try and stop the bomb.

The blue body squeezers would re-appear in the 2015 film, Goosebumps as minor antagonists.

It was the first and only book of the GYB series to be a direct sequel to a book in the Series 2000 spinoff series.