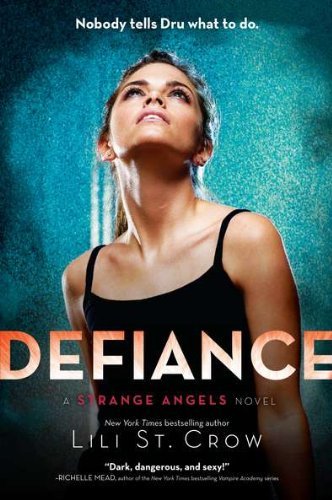 "I wasn’t going to be here long enough for anyone to care."
— Dru Anderson
"You may have all day, but you certainly don't have all night."
— Christophe
Advertisement:

Strange Angels is a series of Young Adult fantasy novels by Lili St. Crow (a pen name of Lilith Saintcrow).

There aren't many girls like Dru. Girls who travel around the country in a beat up old pickup getting rid of poltergeists and roach spirits. Girls who can sense when something weird is about to happen. When Dru and her Dad move to a small town in the Dakotas she assumes it's going to be like every other move. Spend a couple of months, kill some monsters, and get back on the road. It proves to be different than the rest when her dad bites off more than he can chew, bringing a host of secrets back to Dru in the form of his zombified corpse. She's been introduced to a whole new level of the Real World- one with more fur and fangs than she ever expected.

A series of five books: