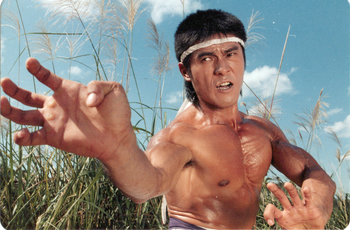 Rare photo of Lo Rei without his ninja mask or outfit.
Advertisement:

In the later years of his career, Lo Rei is more popular as a TV drama actor and producer instead of an icon in ninja movies. His most recent effort in movies is The Virus Of Melissa Wu, an unreleased film made in 2015.