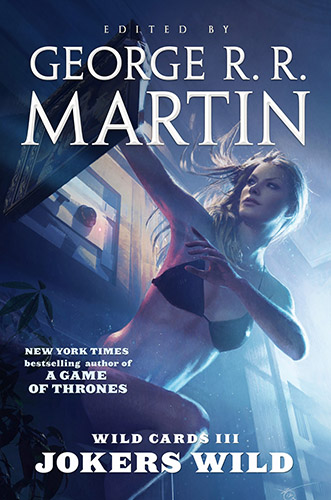 Jokers Wild is the third volume in the Wild Cards shared universe series edited by George R. R. Martin. Unlike the previous two volumes in the series (Wild Cards and Aces High), this volume uses the format of a mosaic novel, where several writers write individual story lines which were then edited together into one novel length story.

The action of Jokers Wild takes place on September 15, 1986, the fortieth anniversary of the release of Xenovirus Takis-A, the so-called "Wild Card virus". The anniversary of this event is observed as Wild Card Day and celebrated or cursed depending upon each individual victim's reaction to the virus.

This particular Wild Card Day sees the Aces of New York City stalked by the evil Astronomer, whose plans had been stopped in Aces High. Determined to get revenge on all the Aces who beat him, and Fortunato in particular, he and his minions Demise and Roulette stalk and kill several characters throughout the course of the book.

Unlike the previous two novels which had several self contained, one chapter stories and characters that appeared only once, Jokers Wild follows pre-established main characters and their interwoven stories. The main characters are: