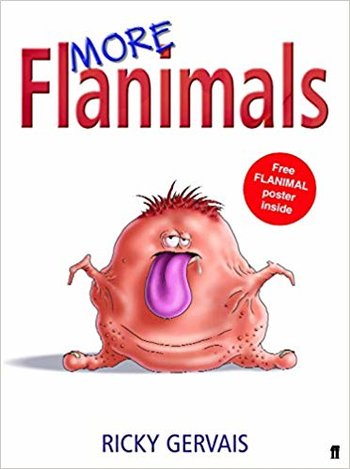 Flanimals is a series of children's books by Ricky Gervais and illustrated by Rob Steen. It depicts a world filled with bizarre, inadequate, or just plain useless creatures known as Flanimals and their behavior, accompanied by humor of all kinds, strange terminology, and one hell of a Lemony Narrator.

The series consists of four books. The first two, aptly titled Flanimals and More Flanimals, describe most of the life on the planet. The third, Flanimals of the Deep, details the aquatic life on the world. The final book, Day of the Bletchling, depicts the emergence of the titular creature and takes the series in a very different direction...

Tropes applicable to the series as a whole.

open/close all folders
Flanimals
More Flanimals
Flanimals of the Deep
Flanimals: Day of the Bletchling