Asbel is the eldest son of Lord Aston, ruler of the city-state of Lhant. As a child, he was disobedient, adventurous and quick to make friends. Due to an incident during his childhood, he leaves his home and trains to become a knight, in order to find the power to protect those he cares about. He is forced to return to Lhant after hearing news of his father's death, only to receive a tepid welcome.

Throughout the game, Asbel struggles with the idea of responsibility he has as the next Lord of Lhant and his desire to keep his loved ones safe.

His Accelerate Mode is Spiral Surge note Japanese: "Accel Force", which summons a dark flame that orbits Asbel and damages any enemy it touches.

An enigmatic, purple-haired girl with no recollection of her identity, Sophie has an innocent atmosphere about her, but is actually a quite proficient fighter. She has vowed to protect Asbel.

Her Accelerate Mode is EX Boost note JP: "High Boost", which gives her the ability to Flash Step and increases her combat statistics.

Asbel's younger brother. The more quiet, responsible of the two, Hubert likes to point out his maturity compared to Asbel a lot.

His Accelerate Mode is Arrow Squall note JP: "Arrow Rain", which damages enemies in a wide area for a limited period of time.

Granddaughter of the Lhant household's butler. She has a crush on Asbel and is the party's main healer.

Pascal is a genius researcher and technician with quite a few screws loose. She is loud-mouthed, cheerful, and serves as the heart and soul of the group.

Her Accelerate Mode is Runic Shield note JP: "Round Shield", which dramatically decreases the amount of damage taken by all allies within the area of effect and prevents stagger.

Asbel's instructor from the Knight Academy. Asbel looks up to him as his mentor and role model. He's the second offensive mage of the group.

His Accelerate Mode is Harsh Lesson note JP: "Grapple Dance", a 35-hit melee attack that grants him immunity to physical damage while being performed.

The pacifistic, gentle, though somewhat aloof Prince of Windor. As a child, he befriends Asbel and Sophie. 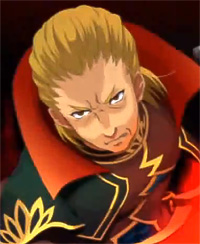 Richard's power-hungry uncle. He murders Richard's father — the King of Windor — to usurp the throne for himself, then sends his soldiers to assassinate the young prince to prevent him from claiming his rightful heritage.

A high-ranking soldier in the militaristic state of Fendel. He has a history with Malik and opposes the party during their search for Fendel's Valkines Cryas.

Pascal's older sister, and by far the more responsible and mature of the two. Like Pascal she is a genius technician, but her field of study also includes biology and bioengineering, the only two fields Pascal is not as successful in.

An Amarcian girl who is in training to become their next leader. She is extremely knowledgeable and dutiful, but also a stickler for the rules.

The loyal butler to the Lhant family and grandfather to Cheria.

Asbel and Hubert's mother. She lives in Lhant Manor, and has a good relationship with her children.

Asbel and Hubert's father, who commanded great respect as the lord of the Lhant territory. His death prompts Asbel to return home from the Knight Academy.

The President of Stratha who Asbel and the party meet in their attempt to help Hubert keep his position as Governor of Lhant.

Hubert's cousin-in-law and second-in-command of the Strahta Army stationed in Lhant. He resents the fact that Hubert — an adopted member of the family — is seemingly given preferential treatment over himself.

Solomus
An entity in control of the Zhonecage, part of the seal placed on Ephinea to prevent Lambda from escaping. He was supposed to just observe the planet, but thanks to the EX Dungeon turning everything into a Tournament Arc, he goes a little nuts and decides to assemble an invincible fighting team called the Terma Ten, all with the goal of destroying Ephinea to "save" it from Lambda.

A very bizarre race of friendly merchants found all throughout the adventure.

WARNING: Each of these characters is a Walking Spoiler. Spoilers in their folders will be unmarked!
The Forsaken Child 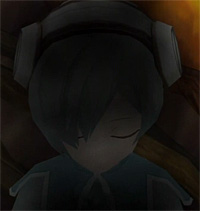 A mysterious being whose presence influences many events in the story. Lambda is an immortal Energy Being who resides within Richard for the majority of the game. As he does not have a physical body, he possesses other people and grants them access to his limitless power, effectively making them immortal. However, Lambda can also whisper into the mind of his host, sewing seeds of mistrust and eventually taking them over completely. Which is even worse than it appears, as he regards humans with (understandable, given his past) utter disgust and fear. 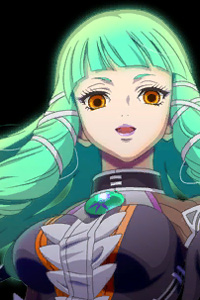 A young researcher who the party find sleeping in a pod on the planet of Fodra. Emeraude is highly knowledgeable about Lambda, Sophie and most of the backstory. She is largely responsible for Lambda's Start of Darkness, having carried out a series of cruel experiments upon him with the goal of restoring the wartorn Fodra to its former glory.

A mysterious woman who appears in the "Lineage & Legacies" scenario of Graces f. She has a strong connection to Sophie, as if looking like her as an adult didn't give it away. She is actually a manifestation of Fodra itself, born from the eleth of its core.