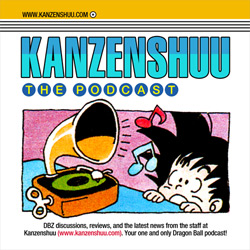 "So, we're not going to sit here and talk about and say, 'Hey, I really like episode #184, when Gohan goes Super Saiya-jin 2.' Because that would be really boring."
Welcome to Daizenshuu EX, the podcast! An extension of the all-encompassing website, Daizenshuu EX! We cover anything and everything Dragon Ball in hopes of enlightening... and a little bit of entertaining.
Advertisement:

Daizenshuu EX was a major Dragon Ball fansite. It started as Vegetto EX's Home Page in 1998, before becoming Daizenshuu EX in the early 2000s. On April 1, 2012, the site fused with with fellow fansite and frequent collaborator Kanzentai, and was rebranded as Kanzenshuu. The website has also hosted a weekly podcast since late 2005 that has run on a weekly schedule for over 300 episodes.

and the podcast page is here

The podcast is usually hosted by any combination of the following folks:

Guests hosts range from other longtime fans, to moderators from the forums, to other website owners, to official people from within the anime industry, and more.

The podcast usually follows a standard format: Introduction, News, Topic, Releases, and e-mails. Various other segments have also been included from time to time, such as Meri's Top 5 lists, Julian's ABCs, Mike's Fandom Theater, Song-A-Week, "Who's that Character?" etc. One special topic was the "Manga Review Of Awesomeness" and later the "GT Review Of Awesomeness." Jeff, a friend of Vegetto EX and Meri, was at first only familiar with the Cell Games era of the anime in his first appearances. He was later brought on to go through the manga, and later Dragon Ball GT, from beginning to end, providing fresh opinions to the show.