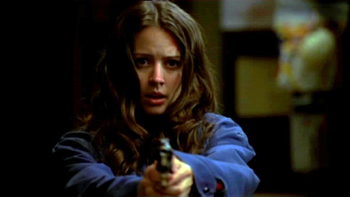 Everyone in L.A. is happy and cheerful. The first scene opens with The Beach Boys' "Wouldn't It Be Nice?" playing behind a montage of harmonious street scenes of pedestrians and drivers in the city, until Fred runs into a car at an intersection. She's pursued by Wesley and Gunn, but Fred eludes them by hiding out in a sewer under a shopping center.

Back at the Hyperion, Lorne has to turn away people who have come to the hotel to see Jasmine. She makes time to talk to many of them, and Angel asks how Jasmine always knows exactly what to say to people. She tells him that she looks into their hearts, though sometimes what they need is right on their faces. She tells a man in Spanish that his mustache "provides [him] great strength and dignity." Wesley and Gunn return with the news that Fred escaped. Connor wants to kill her and bring her back, but Wesley reminds him that Jasmine wants her alive. Jasmine invites a couple of people to go upstairs with her, while Wesley and Gunn admit to wishing she would pick them.

Fred goes to the Magic Bullet Bookstore, which she apparently visited three days earlier to read up on mass hypnosis. Now she's looking for information on mind control. The shopkeeper mentions that business has been slow. Fred commiserates with him. He says that he used to be obsessed with mind control, and though he still believes in it, he just doesn't worry about it anymore. The shopkeeper pulls out a gun—then a yo-yo and a book called Making Mind Control Work for You—and says that he thinks Fred is trying to get the government to learn about Jasmine's love.

Connor and Angel try to track Fred through the sewers; Angel learns that Connor has been tracking people since he was a kid. Holtz would tie him to a tree and then run away, expecting Connor to free himself and find Holtz. Angel is shocked that Holtz abandoned Connor like that, but Connor considers it good, since he learned to track. Angel and Connor both suddenly close their eyes, receiving a message that Jasmine wants them back at the Hyperion.

Back at the hotel, Wesley, Gunn, and Lorne are helping Jasmine build her media empire. Connor and Angel arrive, confused as to how they were able to receive a message. Jasmine explains that everyone is connected by love, and she wants to test that connection to see if they can find Fred. Everyone holds hands as Jasmine tells them to picture Fred and concentrate on finding her...

Fred checks into a motel, where people around her start looking at her. Fred takes off running, passing a man who is fueling his car. Another car hits his car, which sets off a fire. The guy from the car gets out and, in flames, walks to Fred, calls her by name, and tells her not to be afraid...

Jasmine's hand starts smoking. She explains that she saw Fred, and all of the Jasmaniacs now know who Fred is and what she looks like; Fred has nowhere to run and nowhere to hide. In the meantime, the Angel Investigations team takes charge of meeting the needs of various pilgrims in the hotel, meeting Jasmine's demands though a sort of psychic network that connects everyone under her spell.

Somewhere far away, Fred walks by the side of a highway. When thinks she's spotted by a passing SUV, she steps off the road and falls down a hill. She finds herself in a cave where a short demon is also holed up. The creature assures Fred that he won't hurt her; it doesn't seem to matter, since Fred makes sure he knows that she can handle herself. She tries to collect herself.

Back at the Hyperion, Wesley is giving a presentation to the assembled crowd about an insidious evil among them: Fred. He passes the podium to Lorne, who gives the "hourly Jasmine report." He then announces a new surprise - open mic night, an opportunity for everyone to pay their respects to Jasmine. A montage follows of various odes to Jasmine, including Lorne singing "Freddie's Dead" and Angel and Connor singing a revised version of "Mandy".

The demon in the cave reveals that he's hiding out because of "those freakin' Jasminites and their demon jihad." The two find common ground as fugitives, but then he gets hungry and attacks Fred, who is injured but fights back with an axe, killing him.

Fred returns to the Magic Bullet Bookstore, luring a crowd of people outside. The shopkeeper tells Fred that she's famous now, and that he's not supposed to hurt her. Jasmine arrives with Angel and Connor and, in exchange for the shopkeeper's help, tells him that Lee Harvey Oswald worked alone in assassinating JFK.

Jasmine turns to Fred, who says that she's sorry, and Jasmine accepts the apology, but it turns out that Fred is talking to Angel. She raises the shopkeeper's handgun, aims at Jasmine, and fires. The bullet goes through Jasmine and then into Angel's shoulder. Angel vamps out and attacks Fred, grabbing the gun and pointing it at her jaw. Crying, Fred tells him to look at Jasmine. He does, seeing the same decaying, maggot-infested flesh that Fred saw earlier and is released from her spell, being left in a state of shock.

Jasmine realizes that it was her blood that released Fred and Angel and tells Connor that Angel is infected. Fred shoots Jasmine repeatedly, and an enraged Connor attacks her, knocking her out. Angel fights Connor off, then makes a run for it with an unconscious Fred in his arms. Connor wants to follow, but Jasmine tells him she needs his help. Looking around at much blood she's lost and tells the shopkeeper to burn the store down.

Back in the hotel, Jasmine returns to find the pilgrims sharing a potluck. She goes into the office, and Wesley, Gunn, and Lorne follow her. Jasmine explains that they've lost Angel to Fred, and proclaims that they cannot be helped. Jasmine declares that, in order to prevent further "hatred," Fred and Angel must be killed on sight. She takes Connor with her as she leaves.

Elsewhere, Fred awakens to Angel in a darkened alleyway. Angel is depressed, admitting to Fred that he misses the way Jasmine made him feel even if it was only a lie. Fred tells him that she feels the same, and that she still cries despite it being over a week by now. She explains that that Jasmine's blood breaks the spell - she got it in her system when she washed Jasmine's shirt, and Angel got it after the bullet passed through Jasmine. Angel assures her that despite how awful they feel, she did the right thing. At this, Fred breaks down in tears, admitting that she's scared and claiming that she isn't a champion like Angel, but Angel comforts her and insists otherwise.

Fred decides that they need to get more of Jasmine's blood so that they can break the spell for the others. Angel points out that they'll never be able to get close to Jasmine now, but then he has another idea. Before he can explain, they hear people coming, and Fred kisses Angel to throw the people off. Unfortunately, it doesn't work, and the two are forced to run.

Upstairs, Jasmine asks Connor to guard the door after she takes several people into her room. She asks them to remove their clothes, then examines her wound in a mirror, magically healing herself...

Angel and Fred sneak into Cordelia's room, finding she's still comatose. Angel apologizes to Cordelia, then starts to cut her arm with a knife. She grabs his wrist and he panics, thinking that she's awake. Fred has to tell him that people in comas sometimes move or do things that don't mean they're waking up. They are able to get a small amount of blood, but Lorne comes in and finds them. Angel puts a hand over his mouth, and "infects" him with Cordelia's blood, breaking the spell.

Upstairs, Jasmine comes from out of her room, accompanied by a bright green light. Connor asks what happened to the three people who went into the room, and Jasmine replies, "I ate them." Connor is awestruck and impressed.

Lorne lures Wesley and Gunn upstairs, grabs a baseball bat, and knocks them out so that Fred can administer the cure. When they come to, Angel explains that Cordelia's blood worked because Jasmine used her to gain a physical body, so they share a blood link. Wesley brings Connor in, and the others hold him down for the cure. After Connor calms down, Angel tells him they had to make him see the truth. "You understand why we're here?" Angel asks. Connor nods, but then throws open the door and shouts to the rest of the Jasmaniacs, alerting them to the gang's presence.