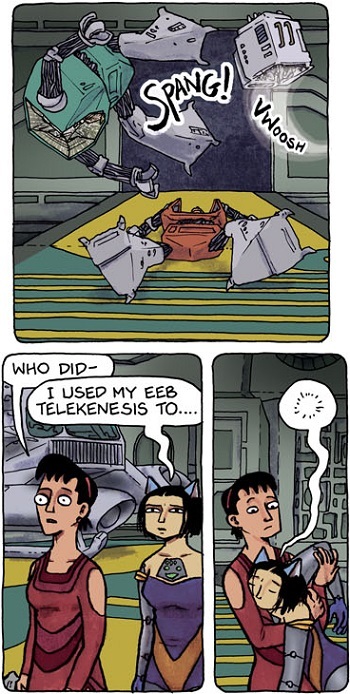 It can be hard to show all the aspects of a fictional ability since such a thing does not have any Real Life context to which the audience can relate. So when a creator wants to show that using a special power takes a toll on a character, he will often have the character faint afterward.

This is especially true when the character uses a power for the first time because they might overdo it due to inexperience. Presumably, the strain of using it is too much for them, causing their mind to shut down in self defense.

This is frequently used for powers that aren't flashy in order to make them seem more dramatic, such as telepathy and other Psychic Powers.

If the fainting is a symptom of a more serious health problem, it's also a case of Heroic RRoD. (Or a Villainous RRoD, depending on the character.) When it happens the first time a power is used, it's related to How Do I Shot Web?. Can be a form of Blessed with Suck.

If the collapse is after a dramatic win, especially a battle, and is used to skip the boring aftermath, it's Post-Victory Collapse.