open/close all folders
Don, the Host 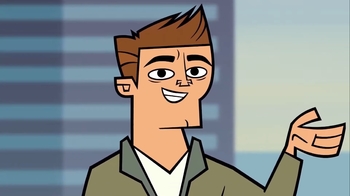 The host of The Ridonculous Race. Though often egotistical and more than a little narcissistic, Don cares a lot about following the rules and doesn't hesitate to hand out penalties to those who break them. A firm believer in fair play, devious contestants skilled at avoiding elimination frustrate him to no end. 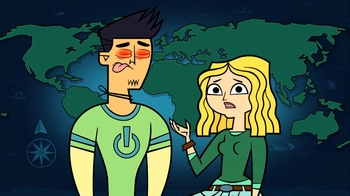 Two very close childhood friends who do everything together. Carrie is a sweet young lady with a cordial personality, and while Devin may not be the brightest bulb in the box, he is still a very nice guy. However, Carrie wants a bit more than friendship from Devin, although he remains oblivious to it.

Kelly and Taylor, Mother and Daughter 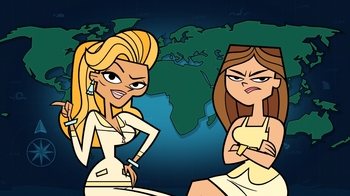 A pair of rich socialites. Kelly is a trophy wife who enjoys being the "cool mom" (her words) and spoils her daughter rotten without questioning her. Taylor is a vain and bratty Daddy's Girl who walks all over her mother in return and rarely has a good word to say about her put-upon parent. 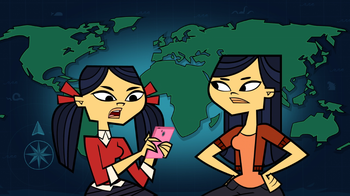 Two sisters who are like chalk and cheese. Kitty (the younger sister) is fun-loving, sometimes a little scatter-brained, and in the race for a good time. Emma (the older sister), on the other hand, wants to win and looks down on anything that could be considered frivolous, such as romance. 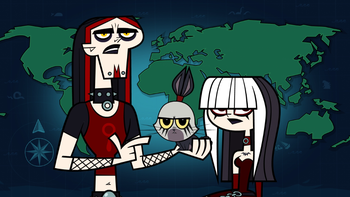 Ennui is on the left, Loki is in the middle, Crimson is on the right

Two (later three) very morose and morbid goths of few words - or, in Loki's case, no words at all (due to being a rabbit, and all that). Though they show little emotion and greet the world with permanent deadpan stares, they're not bad people inside. Crimson and Ennui are a dating couple. 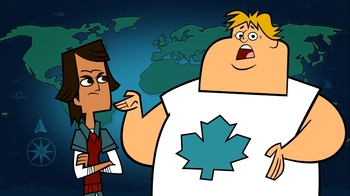 A pair of popular and well-known returning contestants from Total Drama. Owen is a big, sweet, gassy, and not-too-bright goofball who loves to eat, while Noah is a Brilliant, but Lazy, sarcastic, cynical, and condescending bookworm. Somehow they're close friends. 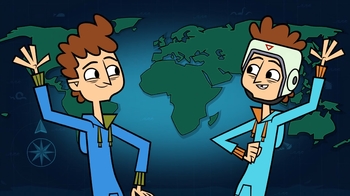 Sickly but determined twin brothers with all the bad luck in the world, as well as countless physical ailments, phobias, and allergies. No one who knew them believed they'd even last an hour in the race but they entered anyway. Maybe they're not as pitiful as they seem?

Voiced by: Lyon Smith (both) 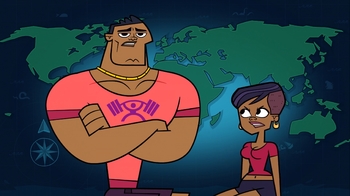 A loved-up couple that met at the gym and have been attached to each other ever since. Ryan is a massive bodybuilder whose hulking form belies his calm nature (though he does have limits to his patience), while Stephanie is fuelled with a fiery sense of passion that can get the better of her. 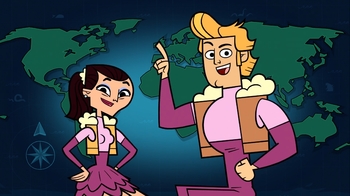 Silver medalist Olympians from Quebec who entered The Ridonculous Race to help salvage their reputations after Jacques dropped Josee during their performance and the two became national embarrassments. Wickedly devious, wickedly capable and sometimes just plain wicked, they'll do anything to win. 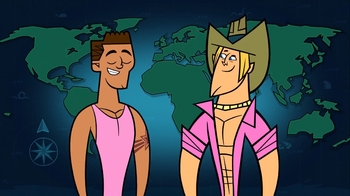 While Geoff has experience with reality shows from his time on Total Drama (where he met his longtime girlfriend and fellow surfer Bridgette, whom he originally planned on bringing to the race), Brody is new to this and relies on his buddy to guide him. Both love surfing, chilling and being the best of friends.

See Total Drama Killer Bass for tropes specific to Geoff during his time on Total Drama.

Dwayne and Junior, Father and Son 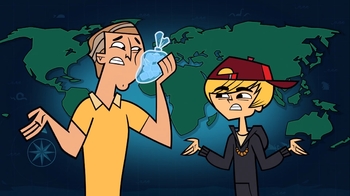 Bumbling Dad Dwayne and his often exasperated son Dwayne Jr. are in the race both to win and to score some bonding time together. Dwayne means well but is cursed with bad luck and his own air-headedness. It's often his son, who despite being the youngest contestant is more than Wise Beyond Their Years, helping him out of whatever muddle he's fallen into. 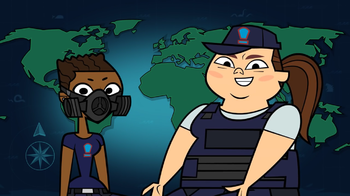 Sanders is on the left, MacArthur is on the right

A pair of Action Girl trainee cops who are as different from each other as night and day yet still manage to work well together. While MacArthur is hot-blooded, hot-headed and fiercely driven, Sanders is much calmer and acts as the team's conscience and voice of reason. 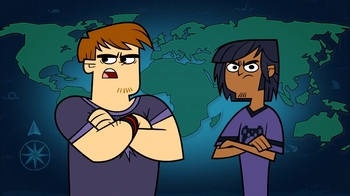 Two irresponsible stepbrothers who loathe each other more than anything else. Their newly married parents entered them in the race in the hopes it would help them get along, but even that won't stop them from constantly shoving, yelling, and arguing between themselves. 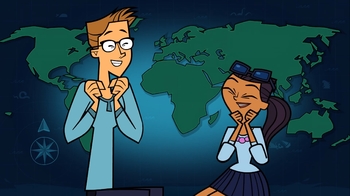 A pair of flamboyant but good-natured fashion bloggers who love to look good and start new trends. They entered The Ridonculous Race as a means of promoting their blog, but even the competition won't stop them from finding the time to get some clothes shopping done wherever they go. 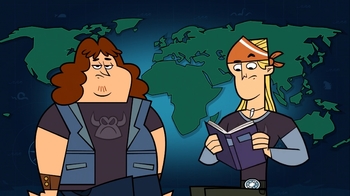 A pair of dimwitted small-town rock music enthusiasts who have their own band called Devil Frog. The two share a strong friendship, to the extent where Rock is usually the only one who can get Spud (who is about as quick-thinking and quick-acting as an actual spud) to react to outside stimuli at all. 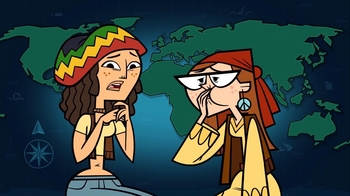 Two dedicated vegans, environmentalists, and animal rights activists who take granola hippie beliefs and values to all new levels. The two want to win The Ridonculous Race so that they can donate their prize money to various charities dedicated to animal rights and the environment. 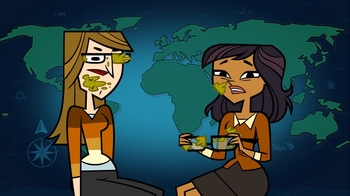 Two extremely intelligent university students who have entered The Ridonculous Race in hopes of acquiring money to fund their research into astrophysics. The two hope to use their superior intellects to win the competition, firmly believing that their smarts will get them quite far. 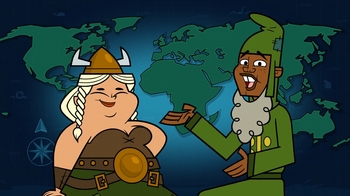 LARPers with a very loose grip on reality. They seem to believe their magic is real and won't hear anything against this delusion. Leonard has had experience with reality TV due to his time on Total Drama Pahkitew Island, but his friend Tammy is a newcomer to this.

See Total Drama Waneyihtam Maskwak for tropes specific to Leonard during his time on Total Drama. 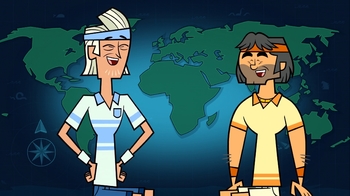 Two aging former tennis stars whose agents entered them in the race together in hopes of using their appearance to score some new sponsorship and merchandising deals. They have a longtime Friendly Rivalry and are always snarking at the other then laughing about it together.