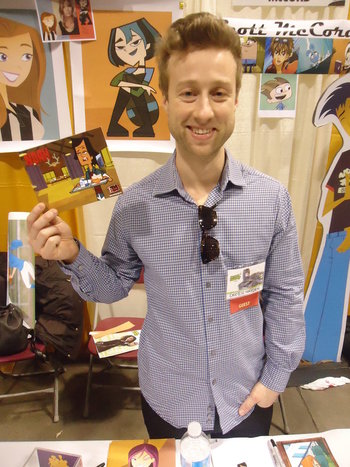 Carter Hayden in 2014 holding a photo of his best-known character
Advertisement:

Carter Hayden (born February 12, 1982) is a Canadian voice, film and television actor who has appeared in a number of animated and live-action series produced in Canada, as well as a few anime dubs.

Carter Hayden is best known for appearing in the incredibly popular Total Drama franchise as the voice of Noah, the sardonic bookworm who ended up becoming a major Breakout Character in later installments of the series. However, he does also have significant roles in lesser known Canadian cartoons like Camp Lakebottom and Dex Hamilton: Alien Entomologist