Total Drama's cast got so big that the page had to be split into several pages. This page is for the season 4 contestants in the Mutant Maggots team.
Advertisement:
open/close all folders
Anne Maria, The Jersey Shore Reject 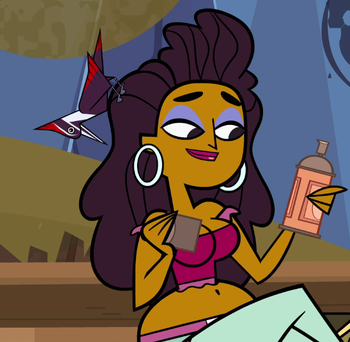 "Sure I want to win a million dollars, but not at the expense of my looks! I mean check me out, perfect hair, perfect tan, all this is worth a billion, easy."
Voiced by: Athena Karkanis
Teams: Mutant Maggots

A tough, cocky, and sassy Joisey stereotype obsessed with her physical appearance and other material things. She is rarely ever seen without her trusty hairsprays and spray tans, which she applies near constantly to ensure she will always be looking her best. 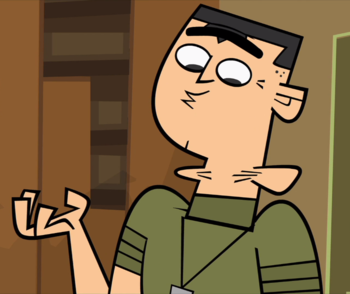 "I may be the strongest player here, but I'm all about the teamwork. Back in cadet camp, I took the teamwork medal three years running"
Voiced by: Jon Cor
Teams: Mutant Maggots, Toxic Rats

An army brat who possesses great strength and unyielding loyalty. Brick shows nothing but soldierly respect for his fellow competitors and firmly lives by the code to "never leave a man behind". Despite appearances though, he is actually very sensitive and quite soft at heart. 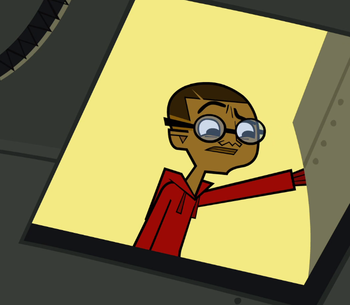 "I am what is known as a bubble boy. Growing up my mom was REALLY overprotective, so I've never gone swimming before. Up until 6 hours ago, I've never done anything before! Except read and sigh a lot. Ahhhh. But that doesn't mean I'm not a force to be reckoned with!"
Voiced by: Kevin Duhaney
Teams: Mutant Maggots, Heroic Hamsters, Villainous Vultures

Having being placed in a bubble for his entire life by his overprotective mother, Cameron has never done anything outside of reading and studying before joining Total Drama. As a result, he is very intelligent and interested in making friends, but also physically weak and quite timid. 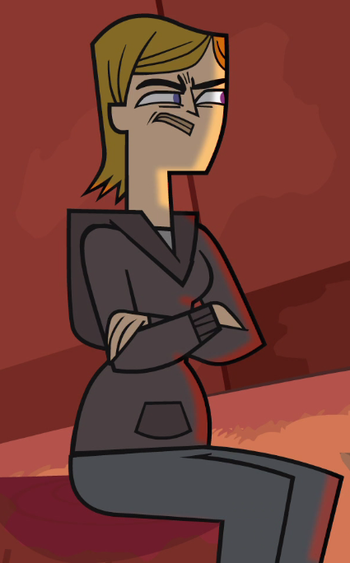 "You will choose me for Total Drama Revenge of the Island, because I am the best, the strongest, the smartest, and by extension, the meanest."
Voiced by: Laurie Elliott
Teams: Mutant Maggots, Toxic Rats, Villainous Vultures

Harsh, merciless, and domineering, Jo is a strong and athletic tomboy who will do anything to take down the competition. Her blunt attitude gives her a very low tolerance for weaklings, while her brutal approach to life gives her a cutthroat streak focused on winning above all else. 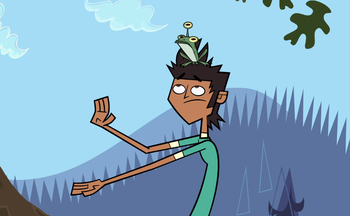 "I can be agile and graceful, but also tough and scrappy, with the keen sense of a wilderness survivor, I'm ready to win this season! I don't care what my doctor says! Um, d-did I say doctor? I meant psychiatrist! AH, no! I mean, oh, do over!"
Voiced by: Cory Doran
Teams: Mutant Maggots, Heroic Hamsters

A cheerful and friendly boy with Split Personalities that cause him to behave like a totally different person under certain situations. Mike's disorder makes it difficult for him to make friends, so he tries to keep it a secret by claiming he's just an overly dedicated actor/comedian. 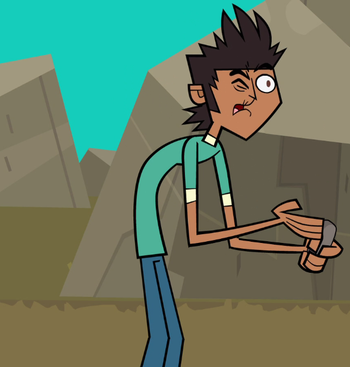 Mike's personification of his inner frustration, who appears whenever Mike is frustrated with a situation. Chester is your stereotypical crabby old coot who complains about nearly everything, especially kids these days. Mike hunches over and scrunches his face when he's Chester. 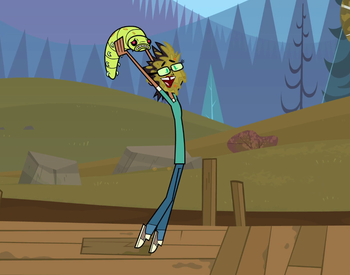 Mike's personification of his athletic prowess, who appears whenever Mike finds himself in a situation where he must be agile. Notable for being Mike's only female personality, Svetlana is an Olympic gymnast from Russia whose grace and agility is unmatched. Mike gains eyelashes, lipstick, and a Russian accent when in this personality.

Vito, the Jerkass from Joisey 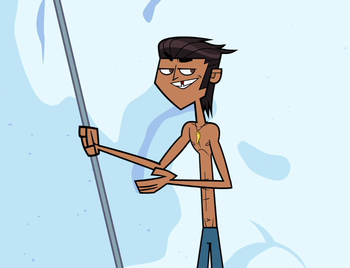 Mike's personification of his Jerkass tendencies, who appears whenever Mike's shirt is removed form his body. Vito is a stereotypical New Jerseyan Italian-American, complete with the cocky tough-guy attitude. When Mike has this personality active, his hair slicks back, and he gains a Joisey accent and a small necklace. 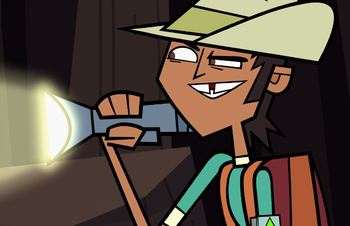 Mike's personification of his sense of adventure, who appears whenever Mike puts a hat on his head. He's a fearless thrill-seeking archaeologist and explorer, as well as a major flirt around women. Asides from the hat, Mike also gains an Australian accent when he's Manitoba Smith.

Mal, AKA The Malevolent One 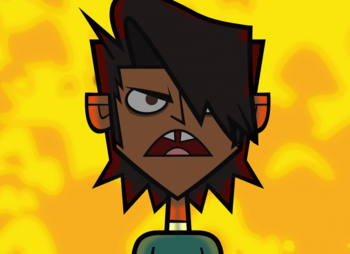 The polar opposite of Mike, taken to the extreme. Unlike the kindhearted Mike, Mal is a heartless sociopath who revels in chaos and destruction. Mike sealed this personality away years ago, but when in this form, he gains a sinister echoing voice, and his hair flips over to cover one of his eyes. 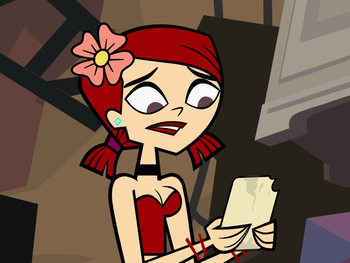 "Wow, I can't believe I'm in the Total Drama confessional; it's so exciting! Everyone seems so nice. I hope they all like me, I could use a few more friends, or friends period. Oh, what if they hate me? Maybe this flower is too big. Am I trying to hard? You like me, right?"
Voiced by: Barbara Mamabolo
Teams: Mutant Maggots, Heroic Hamsters

A sweet, optimistic, and naïve girl with a Friendless Background, due to her hipster interests. She joined Total Drama in hopes of making some new friends and does her best to get along with everybody or gain their approval - although this habit tends to get the better of her.