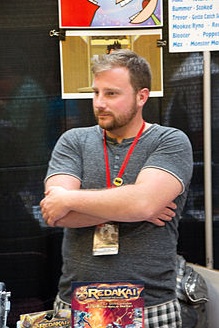 Cory Doran (born February 7, 1982) is a Canadian voice actor whose versatile voice range has been heard in plenty of animated series.

Cory Doran is most famous as the voice of the multi-personality Mike from the popular Total Drama franchise and the happy-go-lucky eponymous character of Jimmy Two-Shoes, with both characters arguably being the roles that allowed him to break out in voice acting. However, he has also had major roles in shows like Stōked, Ollie's Pack, Powerbirds, and Wild Kratts. He's also the official announcer for WildBrainTV, the Canadian equivalent of Disney XD.

Roles of Cory Doran include:
Advertisement:

Cameron gives a big rundown on how each of Mike's personalities front.

Cameron gives a big rundown on how each of Mike's personalities front.