Total Drama's cast got so big that the page had to be split into several pages. This page is for the three new players that appeared in Season 3. 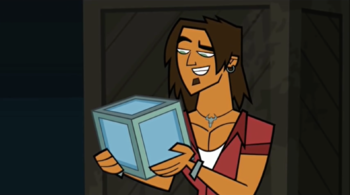 A proud and talented Spanish-Canadian whose way with the ladies is unmatched. Alejandro is as dashing, rugged, and charismatic as he is ruthless, manipulative, and cruel. With his ability to smooth-talk his way out of any situation, this handsome devil knows all too well how to exploit the faults of his fellow contestants. 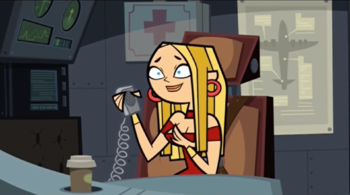 "What's wrong with you people?! This is "Total Drama," not "Total Forgive and Forget"!"
Voiced by: Carla Collins

A conceited personality who cares only about being in the spotlight and digging up celebrity-related dirt and gossip. Blaineley was a co-host on Celebrity Manhunt, but joined World Tour's Aftermath show as Geoff's co-host (since Bridgette was competing). However, events conspire to put her in the competition against her will. 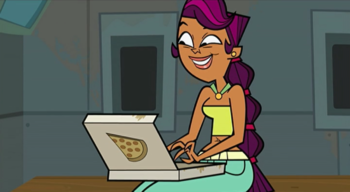 "Do you have any idea how many millions of fans there are out there? I've been watching, blogging, PVRing you since the first episode! I, I mean, we, have fan sites about each and every one of you. We know everything about you, and we are rooting for you! We know your eating habits, your hopes, your fears...YOUR DENTAL RECORDS!"
Voiced by: Annick Obonsawin
Teams: Team Chris is Really, Really, Really, Really Hot, Team Amazon, Heroic Hamsters

A longtime fan of the Total Drama series massively obsessed with the show and its cast. When not gushing about how much she loves being on the show, she is usually obsessing over Cody, who is her favourite of the contestants and whom she sports a gigantic crush on.