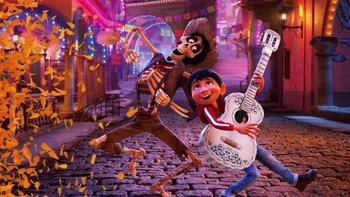 Not bad for a musically cursed family.
Advertisement:

As a film made by Pixar/Disney that's themed entirely around music, it's all but guaranteed that Coco would be blessed with an amazing soundtrack. With the score composed by Michael Giacchino and songs written by Germaine Franco, Adrian Molina, Robert Lopez, and Kristen Anderson-Lopez, this film is chock full of ear worms that you'll gladly being singing along to for months. The entire soundtrack is available for listening on Disney's Official YouTube Music Channel.