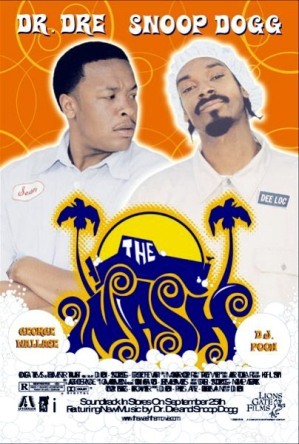 When you're down 'n dirty, it all comes out in...
The Wash is a 2001 comedy film starring Dr. Dre, Snoop Dogg, DJ Pooh (who is also the director), and Eminem.
Advertisement:

Sean (Dre) has just been fired from his job at the Foot Locker and needs a new one so he can come up with his half of the rent money. His roommate Dee Loc (Snoop) recommends he apply where he works, at a local car wash, aptly called "The Wash". Sean becomes the new assistant manager and now has to contend with being his friend's new boss, managing the rest of the Wash's wayward employees, keeping his boss Mr. Washington happy, dealing with disgruntled ex-employee Chris (Eminem), and even save his boss from being kidnapped.

The film was not critically acclaimed, but did win a couple of High Times Stony Awards - one for Stoner of the Year (Snoop Dogg) and one for Best Soundtrack.