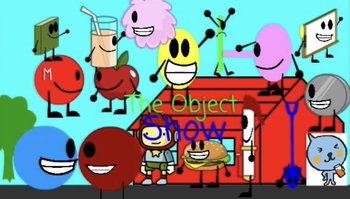 The Object Show is, well, an Object Show, made by Kaie Goodman, which was made with GoAnimate.

Star, the main host, had established a competition show in which original competitors and contestants from other object shows and franchises compete to win contests and avoid elimination.

The first episode of the series is "Gooey Eats Burger

", about Gooey eating Burger, although the episode does not have a contest taking place.

The show was canceled around 2014 to 2015, and the creator Kaie Goodman considers the creation of the show Old Shame. However, they have recycled the character Doodle Board for future use by them.

A playlist of all the episodes is available here

, except Episode 3, which you can watch here

Not to be confused with the similarly titled Object Show, Object Show 87 or the main page.

The Object Show provides examples of: