Literature / Million To One 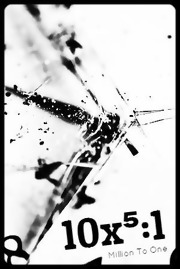 Million To One, occasionally abbreviated as "10x⁵:1", is an on-going original Web Serial Novel written by Zeke Freek and published on Fictionpress. The story takes place just before December 21st, 2012, the supposed end of the world. Just as the clock strikes midnight, time loops back one week to December 14th and nobody remembers anything that happened... except for a group of high-school kids in an unspecified eastern-european country who are being forced to compete in various supernatural challenges by an entity who calls himself, "God". It's written from the first-person perspective of the protagonist, Camera, an anti-social jerkass who considers himself more of an observer in life than a participant. Things develop slowly and become very complex as time continues to loop back, piling on mystery after mystery.

Originally started on June 15th, 2013, Two loops have already been completed. The series' update schedule is inconsistent, but tends to update with a new entry every 2-4 weeks or so.