BlazBlue, much like Guilty Gear, has plenty of Rummage Sale Rejects to go around. This is a list of the playable characters who were introduced in the arcade version of BlazBlue: Continuum Shift. Due to the sheer amount of trope presented, the page had to be split. To see characters introduced in the console release and later iterations, refer to BlazBlue: Continuum Shift Additional Characters. Voice actors are listed as Japanese/English.

open/close all folders
Lambda -No.11- 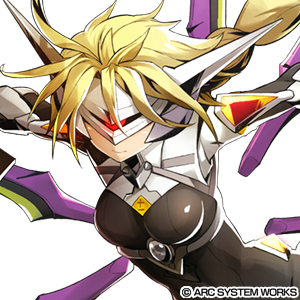 If you know what's good for you, don't hurt Ragna when she's around.
Profile

"O' silver blade forged in the depths of the beyond, hear my summons and purge those who stand in my way. Lay waste."

Voiced by: Kanako Kondo (Japanese) / Cristina Valenzuela (Continuum Shift-Chronophantasma) (English)
After Nu's apparent death, Kokonoe has Tager salvage the 11th Prime Field Device from Ikaruga, and then plucks Nu's soul from the Boundary, erases her memories, and implants her within her predecessor's body. She is now completely subservient to Kokonoe and is used as another tool in her plan to get revenge on Terumi. As she inhabits the body of her predecessor, she is not the juggernaut she was before. This is manifested gameplay-wise in the form of loads of balance changes.
Her Arcade mode playthroughs are named, in the second and third games respectively: The Numbers and Departure. Her story mode playthrough in the second game is named lacrima No-11.
In Chronophantasma, Lambda disappears to make way for the return of Nu. However, in CPEX, Lambda is added again to the roster on October 9, 2014. She will be based on Nu's current Luna Form stance. To further differentiate herself from Nu, the swords that Lambda summons are brand-new and she has a green, ethereal aura surrounding her. Her Drive has been renamed Sword Summoner II. The swords that she summons have shorter range but bigger hitbox than Nu's. Her playstyle is also different from Nu's, while still mostly a zoning character, Lambda focuses more on getting up close to her opponent and using her melee attacks. Her Overdrive, Elysium, increases the size and damage of her Drive attacks and grants them new properties.
In the fourth game, her Exceed Accel Duo Cultus has her stun the foe with her swords. Then she proceeds to do multiple somersaults kicks a'la Guile's Flash Explosion. Her Astral is the same as Nu's.
Tsubaki Yayoi 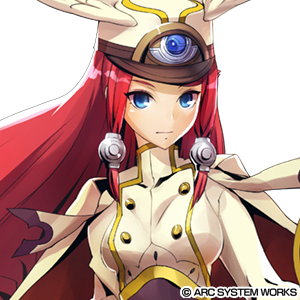 Cue "Ride of the Valkyries".
Profile

"White feathers for innocence, black feathers for darkest sin. We are the messengers and hammers of God, come to deliver righteous justice. Let sinners be punished! Let justice be done!"

Voiced by: Asami Imai (Japanese) / Julie Ann Taylor (English)
A fellow classmate of Jin, Noel, and Makoto from the Academy. Tsubaki comes from the noble Yayoi family. She's also Jin's childhood friend and has harboured a secret crush on him since they were young. After graduation, she served under the Zero Squadron/Wings of Justice, whose duty is to punish those who rebel against NOL. After the True Ending of the first game she was given orders by Hazama to execute Jin and Noel for knowing about his plans. And so she is sent out to Kagutsuchi to accomplish her mission, armed with an Armagus called Izayoi which steals light and uses it as a weapon. Later story developments will have her learning some awful truths which makes her go down the dark path, and her friends must save her.
Her canon path reveals much of her family's history. The Yayoi family is one of the oldest members of the Duodecim - the twelve noble families who helped form the original NOL. Her house and the Kisaragi house, which Jin belongs to, have very close relations with one another. Both families are quite famous, but also infamous within the NOL. Both families have very strange ethics, which causes them to be seen disdainfully in the eyes of the other families. In the Kisaragis' case, they take in children from all around the world due to their talents and are seen as mercenaries. In the Yayois' case, however, they are the opposite - family is the most important thing. So important, in fact, that when children began exhibiting weaker ars magus aptitude were born, members started resorting to incest and inbreeding in the mad delusion they would get stronger. Tsubaki is not the first-born child of her family - she is the first to survive. The day she met Jin, however, was like meeting a long-lost relative to her, and the two became close friends throughout their childhood.
Her Arcade mode playthroughs are named, in the second and third game respectively: ARCH ENEMY and Never Break Your Heart. Her story mode playthrough in the second game is named regret sin.
Her Drive, Install, fills a meter that increases the power of her attacks. In Chronophantasma, her Overdrive is Second Install, which causes her charge gauge to automatically regenerate.
In the fourth game, her Exceed Accel Shinbatsu: Mei wo Iru Ikazuchinote (Court Punishment: Thunder Shoots (Through) the Dark) / Macto Lux Kyrie has her stun her opponent with the Izayoi book. Then she turns her blade into a bow of light and then fires a multitude of laser arrows at the opponent. Her Astral, Shinsei: Hito wo Sabaku Kami note (Saint's Court: God Judges the People) / Requiem Aeternam, has her using Izayoi's power to turn her into an angel and bind the opponent in place as a statue of a goddess (the same one seen in the background of Jin's stage) finishes the opponent off by impaling them with its massive spear. In Chronophantasma, the statue has been recolored black.
Hazama 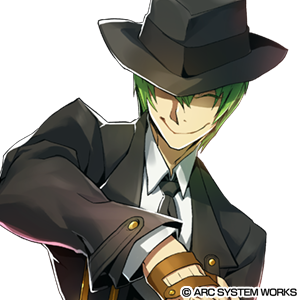 What a SMOOTH CRIMINAL.
Profile

"Fighting's really not my thing."
"Let me show you the power of the Azure! Code: S.O.L. BlazBlue, activate!"

Voiced by: Yuuichi Nakamura (Japanese) / Erik Davies (Calamity Trigger-Continuum Shift II), Doug Erholtz (Continuum Shift Extend onward), Spike Spencer (during Extra Arcade Scene in Continuum Shift II) (English)
Hazama is a Captain within the NOL's Intelligence Department. He claims to dislike physical labor and appears to be quite personable at first, but his true motives are veiled behind his false, foxy smile. Throughout the story of Calamity Trigger, he appears to assist Noel, and appears in a few other characters' stories as well, for seemingly no reason...until the True Ending where all is revealed.
In reality, he is the vessel for Yuuki Terumi, one of the Six Heroes who defeated the Black Beast 90 years prior to the game's story, the Final Boss of Continuum Shift, and one of the masterminds behind every single event that happens in the story thus far. In Calamity Trigger's true ending he drops his amiable personality and reveals himself to be the exact opposite: delighting in the suffering and pain of others. Terumi's true form is actually that of a ghost, due to injuries sustained from fighting the Beast.
In the past, after Takamagahara released him (see Terumi's entry), he cut off Ragna's arm and absconded with his sister Saya to use as the template for the Murakumo Units. He now seeks to revert Noel back into her original Murakumo unit form and use her to destroy the Amaterasu unit, stating that the world is nothing but lies and vowing to plunge it into eternal despair. He uses knives as his specialty weapons.
His story in Continuum Shift reveals that he was the one responsible for the disappearances of the many NOL soldiers during Calamity Trigger - their souls were used to fuel the cauldron that would soon be used to temper Mu into Noel. In the True Ending, he kills Nu, who has resurfaced within Lambda, only to be beaten by Ragna after he gains the Idea Engine. Offscreen, he has Relius kill his body so that his ghost can enter Takamagahara and upload a special virus created by Phantom that destroys them.
His Arcade mode playthroughs are named, in the second and third game respectively: re-Play and Hundred Years Visitor. His story mode playthrough in the second game is named Advent Sword.
His Nox Nyctores/Drive is Geminus Anguium: Ouroboros, which allows him to summon chains that hang in the air and can be used to swing him back and forth or attack his opponents. In Chronophantasma, his Overdrive is Jormungand, which not only strengthens his Drive attacks, but also grants him his infamous life steal ring/aura from his Unlimited Mode.
In the fourth game, his Exceed Accel Meija Gekkouga/Glimmering Fang of the Basilisk has him stunning his foe with a kick. He then does some more kicks, ending with Serpent's Infernal Rapture, then he catches the launched foe with Ouroboros and slams them back to the ground, and finishes it with a slash of his knife covered in dark energy. His Astral, Senkon Meiraku/Hungry Darkness of 1000 Souls, has Hazama forming a portal beneath his feet that summons multiple Ouroboros chains from the ground to launch the opponent into the air. He then drops into his Terumi persona and summons thousands of serpentine spirits which coalesce into a monstrous snake that devours the opponent. Hazama then takes off his tie and holds it over his opponent's lifeless corpse. In the fourth game, this has been changed so that Terumi no longer takes over.
It has been revealed that Terumi will become a separate character from Hazama for the console release of Chronophantasma, and will have a completely different moveset. For more information, see his character page.
If you prefer to read this, told by Terumi himself, go here.
For more, see his character page here.