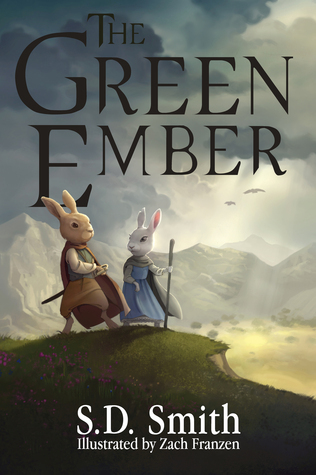 The Green Ember is a series of children's novels written by S.D. Smith.

In a small community within the country of Natalia, siblings Heather and Picket have their lives turned upside-down after a small squadron of deadly wolves raid and burn down their home. Although Heather and Picket manage to escape, they soon find themselves stuck in the middle of a war going on between the dreaded Morbin Blackhawk and the residents of Natalia who long to seek freedom from his tyrannical control. But as they uncover the secrets about the war, they soon realize that their family name isn't beloved by many, and that their greatest threat may not be Morbin at all...

There are currently nine books in the series. The Green Ember, Ember Falls, Ember Rising, and Ember’s End are all sequential books focusing primarily on Heather and Picket as they gradually develop and become prominent figures in the war against Morbin's forces. The prequel series Tales of Old Natalia takes place a century before the events of The Green Ember. It includes the books The Black Star of Kingston and The Wreck and Rise of Whitson Mariner. The books The Last Archer, The First Fowler, and The Archer’s Cup make up the spin-off series A Green Ember Story. These stories are told from the perspective of Jo Shanks, an archer who only had a brief appearance in the first book of the series.

The Green Ember provides examples of: