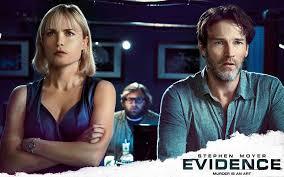 Evidence is a 2013 film from Olatunde Osunsanmi (director of The Fourth Kind and The Cavern) and starring Radha Mitchell, Stephen Moyer, and Harry Lennix that blends elements of a found-footage horror movie and an investigative crime drama. In the aftermath of a massacre at an abandoned desert truck stop, a group of investigators are tasked with examining the footage recovered from the victims' cameras to piece together what happened and discover who is responsible.