Fan Fic / We Rent The Night 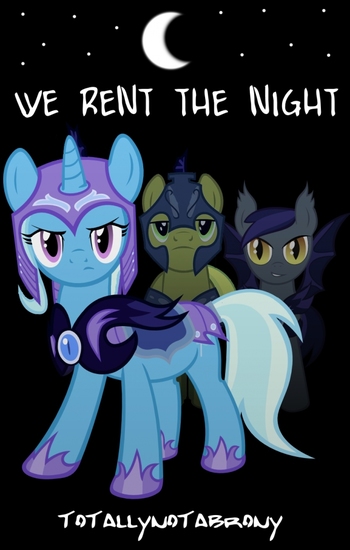 We Rent the Night, is a Mystery/BuddyCop comedy 'My Little Pony'' fanfic, written by TotallyNotABrony

, that can be found here.

After the fallout of the Alicorn Amulet incident, Trixie is arrested and is facing imprisonment. But given the circumstances, Princess Luna takes pity on Trixie and offers her a way out, if she joins the Lunar Guard. Six months later, Private Trixie Lulamoon is the second lowest-ranking out of half a dozen ponies stationed in the small and remote post of Camp Driftwood, on the small and remote island community of Wash Margin, where she miserably awaits the end of her tour, in another three and half years with nothing to do, but march from one side of the island to the other and occasionally take care of the town drunk for the night.

On the bright side though, a new recruit has just arrived, putting an end to her status as ‘’the new girl’’, while giving her a new and inexperienced partner to show around. Oh, and there is this little matter of evidence that a cult worshiping a god of destruction may have surfaced on the island. Well, it puts an end to her boredom.

, which focuses on the side character Melon Rind after a Time Skip.

We Rent The Night contains examples of: