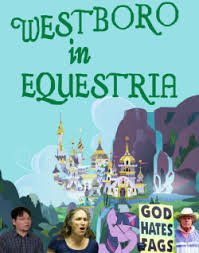 is a My Little Pony: Friendship Is Magic human-in-Equestria comedic fanfiction written by Carts Before Horses. It stars three members of the controversial Westboro Baptist Church. A magical tornado hits their church in Topeka, Kansas, transporting them to Equestria. While there, they must journey from Ponyville to Canterlot to find Princess Celestia, in the hopes that she can send them home.

It is also a parody of The Wizard of Oz, borrowing important plot elements and parodying many of the songs, though not a true crossover.