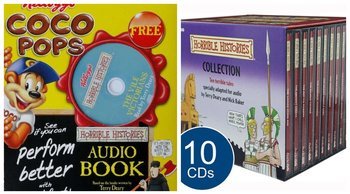 Collect the horrible lot!
"History is horrible! Well it was when I went to school."
— Terry Deary, many of the BBC Audio tapes
Advertisement:

In between the post-cartoon years and the live-action TV series, Terry Deary starred in many Horrible Histories audiobooks that were released in the mid-2000s, either starring himself or himself with other voice actors.

Some of the audiobooks were released by the BBC, featuring regular actors along with Terry Deary which are basically set up like the live action show, but in audio form, with regular sketches, musical numbers and recurring characters; full of humour and references too old for many children listening to understand (and in many cases, their own parents too).

The other audio pieces, only featuring Deary, were released in several strange ways. Some of them came free in many children's Kelloggs cereals, whereas others also came free, but inside several editions of the Daily Telegraph. These ones were completely opposite to the BBC's; it felt like you were listening to a radio play in which Terry Deary read out the entirety of a Horrible Histories book and occasionally had a musical number (although, in some cases, these musical numbers were recycled from the BBC's audio-plays.)

Advertisement:
The BBC audio series (in no particular order)

The other audio series (in no particular order):

Tropes featured in the BBC Series include: