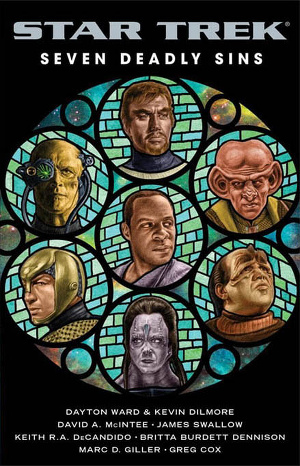 A collection of seven novellas in the Star Trek Novel Verse, each detailing one of the alien cultures.
Advertisement:

Lust. Gluttony. Greed. Sloth. Wrath. Envy. Pride. These are the seven deadly sins of humanity... but humans are not the only creatures in the universe to surrender to their baser instincts. In the world of Star Trek, entire civilizations are driven by avarice, or anger, or insatiable hunger, or one of the other fundamental urges that have come to define these fascinating species. Now, this edgy collection of original novellas explores these empires from the inside, delving into the qualities that shape their cultures and their worldviews, through characters as compelling as they are provocative. These surprising and engaging tales feature all of Star Trek's most prominent adversaries, including the Borg (gluttony), the Klingons (wrath), the Romulans (pride), the Cardassians (envy), the Ferengi (greed), the Pakleds (sloth), and the Mirror Universe (lust), and their adventures on the dark side of the Star Trek universe.
Advertisement: