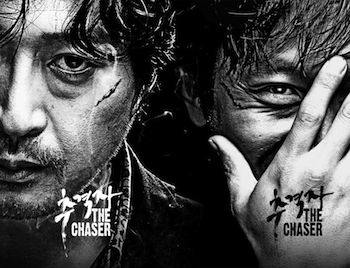 The Chaser is a South Korean neo-noir thriller released in 2008 directed by Na Hong-jin.

Joong-ho is a dirty detective-turned pimp. When his girls begin to go missing, he assumes that they are being sold by another customer. After using his skills to track him down, he is brought to the police only to discover that the man, Young-min, is instead a sadistic murderer and has been killing his girls. To make matters worse, the police have to let him go after twelve hours if no evidence can be found and Young-min claims that he is holding one of Joong-ho's girls, Mi-jin, captive. Can Joong-ho find evidence in time to bring Young-min to justice and rescue Mi-jin?

Set to be remade by the people who brought you The Departed.